California Gov Prepares For The Worst With Wildfire Season – http://huff.to/1kf1Ckc

California’s Wildfire Threat Is So Severe That The Season Started Early – http://huff.to/1iqtgtF 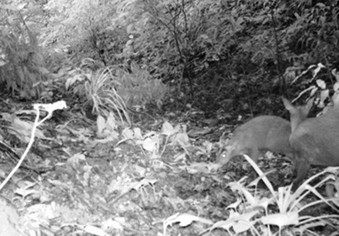 Rooservelt’s barking deer – a species of deer has been announced as extinct in the wild in the last 85 years has been rediscovered at Xuan Lien Nature Reserve, Vietnam.

The Roosevelt’s Barking Deer (Muntiacus rooseveltorum) is one of the most poorly known mammal species in the world. Since it was described as a new species in the early 20th century, no records have been reported until its rediscovery in Laos based on the molecular data derived from hunting trophies by the end of the century. However, after the type specimen was collected during the Kelley-Roosevelts and Delacour Asiatic expeditions, this species has never again been observed by scientists. It has been recorded merely from three isolated localities in Laos based on the type and specimens from hunted animals, although there was an unconfirmed report that it occurred in central Vietnam…

When Congress passed the FLAME act in 2009, there was a great deal of hope that the problems of funding fire suppression would be alleviated. That, however, is not how it turned out. The FLAME act fund was seen as “extra” money that was just sitting around and was summarily raided for other purposes, thus making the fund moot. Now, heading into yet another fire season which promises to be one of the worst yet, we are left with the same problem of agencies and states borrowing money from other funds to pay for their firefighting efforts. This method of fire funding is detrimental on so many levels that it is astounding that this problem hasn’t been fixed yet.

It must be hard to run any part of the government, whether it be local, state, or federal, when you have no idea how much you are going to need to fund disastrous wildfires. In FY2013 alone the United States Forest Service and the Department of the Interior had to transfer over $640 million to pay for wildfire suppression. Additionally, this transferring of funds takes money away from active management measures that could significantly reduce long-term fire risk. Thankfully, there are congressmen that are working on this issue. Senate bill S. 1875 and House bill H.R. 3992 would effectively mean that disastrous fires would be able to be funded like any other natural disaster instead of coming out of other appropriated funds in the Department of Agriculture and the Department of Interior. Even President Obama is in support of changing the way we fund fire suppression. Recently, at a meeting of western governors, the president stated that his administration’s FY2015 budget would contain provisions similar to those introduced in the House wildfire funding bill.

These changes to fire funding are needed. The government pays for the fires either way in the end, and it just seems fiscally irresponsible to not budget for these disasters in a more realistic manner. By shifting the funding pressure from agencies like the Forest Service, they will be able to more effectively spend their time and money managing to prevent these mega-fires in the first place. As with our health, an ounce of prevention is worth a pound of cure, or in this case, a pound of suppression.

If you want to read the bill language, see below:

For more information on fire mangement and wildfires in general, this is a great website: